You may be wondering what i have been up too lately and i am now about share with you exactly that. As well as working through the objectives in previous posts i decided about two weeks ago too start custom rigging in Maya - i have been a big fan of anzovin (Link) and it has saved me up to two weeks worth of work allowing me to fully focus on animating - however, I want maximum control over what a character can do, so i feel now is the right time to be experimenting with this.

I thought i would be sensible and follow the learning pattern i did for 3Ds Max, start by rigging a robot (no skinning process) and then move onto a skinned character later. Right now i have almost completed a robot rig using Mayas joint tool, various constraints and different IK solvers. Rather than constraint the geometry itself and skinning them, i simply parented the joints to the bones. Very little thought went into the design of the robot aesthetically. 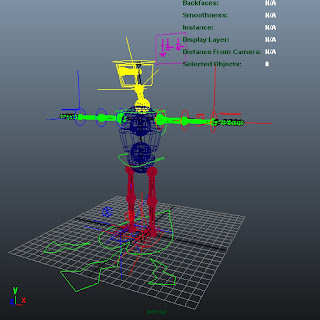 Here is the wireframe image of the whole character & Rig. 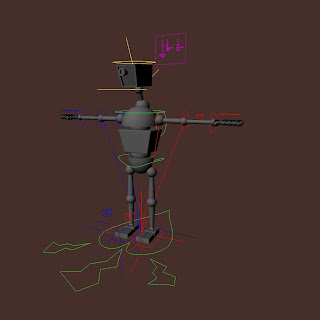 This is the shaded version, the green circular spline at the left shoulder is actually the back control that has a forward and backward roll assigned to it that was made using the Set Driven Key nodes. The Arms have IK/FK which is a nifty feature built in - it also means there are two sets of controls for both wrists. 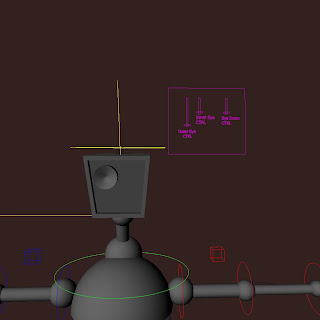 This is the eye shut, I have constrained the eyes functions to the controls to the right. 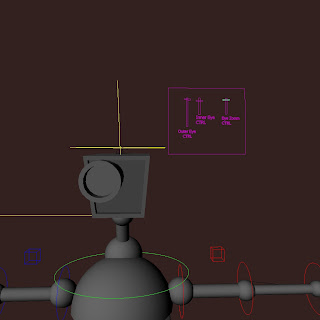 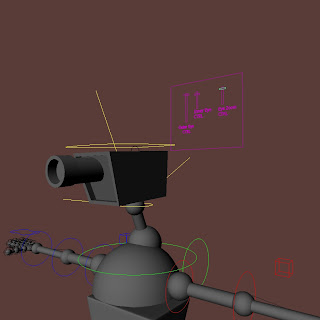 The eye expanded and extended.

The next step in the rigging process will be to design a character to be skinned. Although i may also design a robot with certain functions (a claw arm maybe?) and build on the aesthetic and improve the form. I am spending roughly an hour a day due to other work commitments so hopefully this will be done by the end on the month, maybe early September. I will do a small walk cycle for the character over the next week or so. I first need to make a controller which will make each component shake as if he has an engine that is turned on.
Posted by Adam Weaver