The second round of the Scriptwriting workshops required us to go out and study passers by in public and form a character profile which we would later build narrative ideas from. These are from my observations...

What is their background?

This person was a female born in the early 1990’s to a lower-middle or working class background. She has dyed dark reddish hair and a slightly orange tone applied to her skin. Her eyebrows are plucked revealing only a slight line. She has a rich red coat partly open, most probably due to heat inside as opposed to being scruffy. She has a green skirt that appears to be part of a uniform. The likelihood of this is reinforced by the time of day and location we are both located.

Where are they going?

Judging by the uniform and the way she interacts with her friend/colleague suggests someone in the early stages of possible social mobility. Whether this is via the class system, demographically or against her companions is open for debate. I suggest this for a number of reasons. Firstly, her make up is of a mainstream look popularised by low-value UK television productions but is reserved. This could be down to several things such as employment restrictions or a drifting interest away from popular culture. Secondly, between her and the friend she was the attentive listener and possible agony aunt, only occasionally responding via dialog. She had a firm but casual gaze when listening and talking. She could have an easygoing personality but with a very structural manner and a seriousness to life. By no means would I suggest she is completely confined or bound by a serious outlook. Thirdly, once settled at her table, she slowly became more aware of her surroundings, more frequently breaking eye contact from her friend. Her role as listener made her appear to be the less dominant and thus offers a potential indication of where she is going. She wants to break away from the confines of her socio-demographic surroundings, some excitement and adventure but with a longing for maturity that exceeds her current surroundings.

She was drinking a Mocha Latte and eating either a cake or toasted sandwich – I couldn’t see past the partition – which aids my assumption of a lunch break. Whenever she stirred the drink she would also sip the remainder of the spoon before placing it back down. This was probably an old habit that she has grown up with, suggesting a reliance on a warm family unit, or at least could form part of the ritual process of habit that she longs to escape.

At 12:42 she appeared to be retelling an event but with some exaggeration and her face really opened up and so did her personality with it. This partly aids the idea that she isn’t completely confined to a serious nature.

At 12:50 she and her friend left. She was making small steps whilst walking casually. She appeared to struggle in her high heals but not overly so. This could be she has been in her job for sometime but not too long. Her shoes did not look brand new. 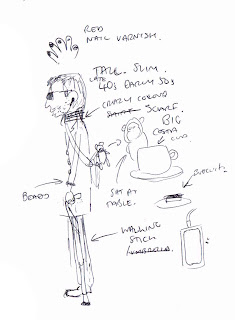 What is there Background?

Having been growing up on the streets after being abandoned at the age of 4, the middle-aged man has grown up misunderstanding the conventions of society. Although he has adapted through a decade of integration, there are many signs that he is not a product of such a systemic and bounded society.

Where are they going?

Having learned life through abstract processes, his ability to build connections, attachments and understandings with objects and nature that typical people would see as immature and irrational, he has been picked up by a group of misfits who believe he is the answer to their acceptance in mainstream society. Our character though has other plans. He wishes to change society, to accept the unconventional as conventional, so he can once again return to anonymity.

How can you tell?

Indoors he wears sunglasses, has red nail varnish on and has his trusted companion ‘monkey’ – a teddy bear that rides half out of his backpack and sits at the table with him. He wears a constant earpiece connected to his phone, to which he shakes his head at. He looked agitated, constantly shaking his leg. He sits in constant silence and is disinterested in absorbing his surroundings.

There were two approaches i had taken in order to maximize the potential later on. The first approach was very analytical. I looked at it as though it would have a slight documentary and sociological outcome, and tried to stick to what was in front of me rather than push my creative license. In the group discussion this was used as the example. In a scene building context we decided that the girl she was talking to had come with her for lunch unintentionally, as our girl (who i observed) shouted to someone else who hadn't heard her, and the girl beside her said she'd go. So there is already a sense of unease between the relationship. During lunch (which i observed) our girl, as i noted, was the majority listener, so we decided that the colleague would be talking about her relationship problems. To finish the scene, we agreed that our girl would turn out to be the ex-girlfriend of the boy her colleague complains about - and she still has feelings. The colleague would be unaware of this. Thinking about life and scene needs, the life need would be to escape this section of society (metamorphosed to escape from this girl), and the scene need would be to get through this lunch.

Person B couldn't of worked out any better. The approach i decided on was to push my creative license, and push the boundaries of the character i was observing. When i sat down with a friend to do this, the person walked through the door. The was such an odd persona being presented and all of the factual information such as the sunglasses, the teddy, the nail varnish amongst others were all true as i had seen them. Having such variety presented on one person really opened up what was possible narrative wise, for which i tailored the back story for. The role for this person was to be in groups of three and receive feedback, for him i received-

He was...
1) Confident due to the nail varnish
2) Pessimistic and doesn't care
3) Not happy - a loser in a comedic sense
4) that he was divorced and crazy

It was interesting experience to really watch a stranger. In the book Thinking, Fast and Slow, it says the brain makes assumptions and judgements on people because its less mental processing work. For creative writing and idea generation, these two examples show how the small pieces of information we extract can be exaggerated for drama purposes and can quickly be turned into a usable foundation for narrative formation. Be warned, if your in Costa Coffee, i could be watching!