The questions that I asked post viewing exposed the weakness of the artefact in the terms of the question. However, it did lead to responses which give hints as to where the next stage of development may lie. For those not familiar, here is a re-post of artefact 09:

Artefact 09 from Adam Weaver on Vimeo.

Which do you prefer?
Which version do you think communicates the narrative more effectively?

1) It was to hard to tell because there was just enough action to suggest narrative.

In future i'll be sure to make the narrative clear prior to showing, particularly if they happen to be as short as this piece.

2) There were many issues raised with the concave to convex, particularly with the eyes looking up as he asks the question. The thought process stops being internal and starts to ask autonomous questions. Generally what is the purpose of this in regards to the narrative?

During the production of the concave to convex piece i was consciously aware of aligning the pose consistently to a convex position in order to not break the central purpose of the artefact. A result of this clearly appears to be an neglect of the other areas of staging, framing and relationship between the elements (and this actually counters my initial intention.) I concur that there is a break in the thought process's internal representation and this is having autonomous influence on the narrative. The questions this artefact exposes shows its value. The question for me at this point, being that i wanted to see the influence of dynamic positioning, use of core and line of action, is at which point do they become silenced by other elements of information signals with the audience? In terms of line of action, which is stronger, arm/hands or eyes? do we need a combination of both or just the eyes? Its clear that hand and arms alone in this instance do not work when separated and cause conflict. So should the line of action be considered with eyes as much as the body in staging? 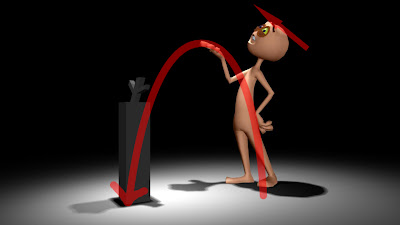 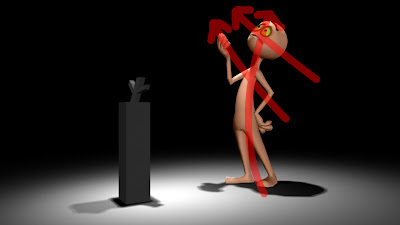 Picuture showing line of action and the breaks causing the conflict in the test.

You may of noticed in my notes on the sketchbook pages my thoughts express whether the change in of  concave and convex shapes doesn't change meaning but can delay it. I still feel that this is the case, but this experiment hasn't been executed efficiently enough to test it. The eyes, it indicates, also plays an influential role in directing the audience. Before i set about testing the eyes against the arms, i am going to re-attempt this experiment to ensure it tests the question efficiently. Before that though, i am going to continue with the re-rigging of the strand of hair.
Posted by Adam Weaver