This weeks feedback and revised notes.

I will quickly refer back to the last post regarding Marc Craste - in todays discussion I think we ended in agreement that he did mean sympathy, and only because of what i mentioned about the audience caring enough about the narrative to see it through (I know its only 40s but how quickly do you switch off to a toothpaste advert?) Unless i have opportunity to specifically ask Marc Craste i think i will remain uncertain. At the time of writing im thinking about his comments about originally wanting to make a quest involving each sport to retain a different piece of the idol that was stolen at the beginning. Surely that would allow time to place emotive action and that is what has been missed as well as sympathy? (remember the sympathy would be the negative result of the stealing of the idol, and the empathy comes from the characters feelings toward it?) There are no emotive (acting) poses, only action poses. My tutor has previously articulated 3 tiers of learning for animation

Now, this talk about emotive (Acting) and action poses comes from Tom Brancroft... 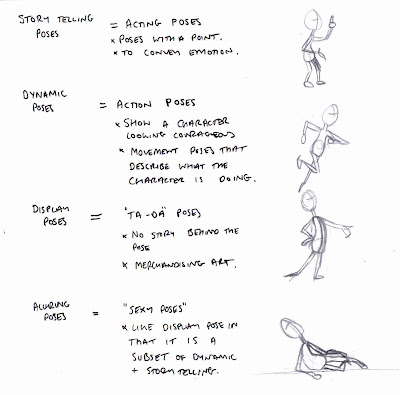 So its entirely plausable to suggest what Craste means is that you can push through a quick narrative with dynamic poses/action, the 2nd tier, in a short narrative. Furthermore it is fair to say the cinematography also plays a big role in carrying the narrative.

Also, i would like to quickly reference back to one of my first posts in october where I talked about the things i didn't like, in particular the DFS advertisement, because i now have the correct terminology to identify the issues with the piece - with the walk to the door established, that is, the dynamic/action, they animator/director has tried to apply the third tier, the storytelling/acting poses, to aid the performance, and has not understood what the characters purpose is other than to display the product. The display pose at the end is the only time he should have his character 'displaying'.

Which leads me back onto my script revision.  There are still issues with the empathy. I think this has come from my focus being centered too much on splitting the POV's of the protagonist and the audience. My supervisor suggested i start by defining his purpose > describe what he FEELS about the situation whilst remembering he is not a hero, he is a tommy, an ordinary solider, so he should have a fight or flight response. He is unsupported, behind enemy lines and needs to respond more to the situation. He suggests one process to identifying these will be to event script, each beat labelled with purpose and objective.

It is good to hear from you.  I can empathize with the frustrations of revisions.

The set-up is still cryptic to me.  I understand you are doing that on purpose, though, so if that is what you want to achieve, you are on target.  Partly, the problem is that I have no way of knowing what is really going on.  It is dark with mysterious flashes of light splashing around now and then.  Fireworks outside affect me as being just weird.  If I am trapped in some kind of exploded rubble, why are the happy people I hear outside not trying to dig me out?

It seems to me that you most enjoy playing around with camera angles, lighting, time lapse, editing.  All of that is good stuff, but it needs to be in the service of a workable story.  I suggest you forget about the camera for a minute and look at the story exclusively from a writer's perspective.  As the writer, you do not have any idea what the director and editor will be doing, so stop trying to dictate their jobs to them.  You tell the story, let them direct and edit, okay?  AFTER you have done that, then switch over to the director's perspective.  You've been handed a script with a story about dementia.  How are you going to shoot this?  No fair looking to see what the writer WANTS you to do.  Screw him.  Writers need to learn their place, which is sitting at a keyboard.  Directing is MY job ….  Then, finally, look at the completed footage from the editor's perspective. "God, the director fucked this up.  I will have to fix it in editing.  …."

I still maintain that your audience cannot empathize with the lead character when they are busy trying to get the story un-tangled.

During a crit with peers and supervisors today i realised that the empathy is still missing. I haven't mentioned how the character feels and how his actions/reaction respond as a result specifically. I can see it in my head, but i need to get in out on page, just like you said in your workshop, animators plot out movement but do not explain emotionally why. I will remove the camera shots - most of them were my own mental notes i did not want to forget - i think this is due to the way we're taught, as we generally cover all parts ourselves, in future i shall keep a separate diary of shots that spring to mind. Where i speak about the fireworks/crowd turning into explosions is the director in myself. It is there at the start before we see anything, i wanted to hint to the audience from the off - maybe this is something i should leave off? I will forward the next edit providing your not sick of hearing it by then!

Thanks again, it really does help.
Adam

You are doing a fine job, Adam.  All of this is a learning experience.  Nobody is BORN knowing how to make animations and tell theatrical stories!

I don't know if you need to leave off the fireworks at the beginning because my focus is 100 percent on the man and his story.  All the fireworks do is establish that there is an "outside".  Barking dogs or an ice cream truck would do a similar thing.  The problem with fireworks and explosions is that everybody knows what those sounds are.  You are messing with the audience's mind quite a lot there be telling them, in effect: "What you hear outside is reality." and then, turning back to the man, saying: "Maybe not."  There must be other ways to indicate his mental state.

ituation. He suggests one process to identifying these will be to event script, each beat labelled with purpose and objective.

As Ed says in his last message his focus is the man and i sense the other elements such as the audio elements are distracting to the core story. So I might remove them in the next edit. or maybe just for Ed's version.
Posted by Adam Weaver