After some more thinking about my project, and more so about the defining word that could be used for seeking coherence, I think i may have found out what that is.

It does have a close association with the projects purpose and theme, confusion. But this is not the reason for selection, and i felt the other words, eerie, warped and fragmented as sub-diversions of uncertainty. There are several influences that actually led me to the word, and these are stylistic references which will inspire the aesthetic. Before i begin, please remember, I see the character as being in the space between memory and reality, and as we draw on past memories, our new experiences often warp, reshape, and redefine those memories, as does our active state. 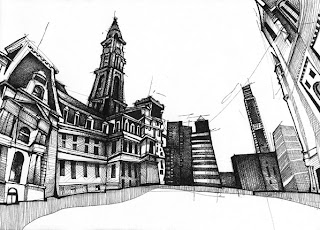 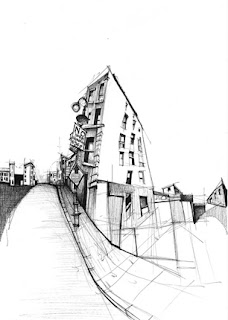 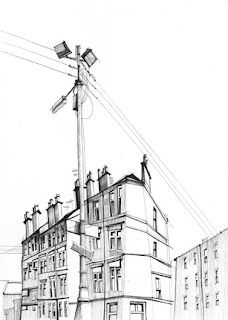 The style of line in his illustrative work conveys an articulated certainty that allows the scenes to be fragmented, this is particularly clear in his book lost and found. NOTE: This is not the lost and found by Oliver Jeffers. What i find more impressive, is that, unlike Alex Pardee (although not his aim), he successfully incorporates that smooth flow in the overall perspective whilst retaining the subtle clash of local perspective between objects. The energy creates the eerie emotion i am seeking. The level of warp is exaggerated and witheld differently throughout the book. Although i like the black and white i do not think this stark contrast would be suitable for my piece.

A study in 2008 concluded that older people have more monochrome dreams than younger people. This they claim will be exposure to monochrome tv's and photos. When asking my grandparents they said they had them. A common devise in modern cinema being memories or past events being shown as monochrome. So, although i do not want a straight black  and white contrast, i am open to monochrome. But, in seeking aesthetic truth to the project, i'm not sure this best portrays uncertainty.

So looking through the digital booklet reflecting on the production of the film i was able to extract their word. It was naturalism. The preservation of hand crafted artistry that one could argue gets washed out of Disney/Pixar inspired movies. The aesthetic of the movie is so appealing to my eyes. From watching the videos on the booklet and reading the quotes, i took the following notes:

Realistic in toned, but stylised. Rotting around the edges. Everything Slightly a-skew. Oddly shaped, but not be aware of the style. Nervous, hand-drawn, illustrated look.

I feel the shape of the objects, having retained the hand drawn line starts to generate the natural feel of the world but on a slightly exaggerated scale. I like the idea of incorporating that look into the project. The idea about authorship can be evoked from it in an almost contradictory way, as i seek to use this in aim of looking purposely warped and fragmented rather than natural. However, the colour scheme, in relation to my project is still too vibrant, and goes against the blend of dream and reality inspired aesthetic i am seeking. 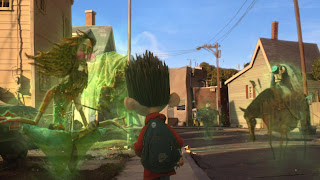 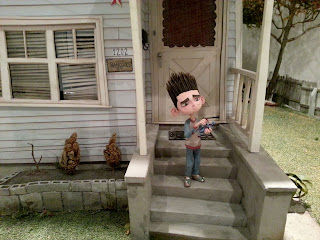 Another Laika production however contains a blend of severely muted colours and the occasional warm colour. Although in this case it is to show she doesn't 'Fit in' the initial world and thus backs up her reason for seeking escape, i think this could be used as a way of projecting the uncertain nature i am seeking. That parts could be reality and parts could be memory. 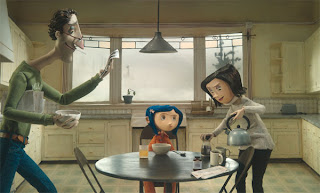 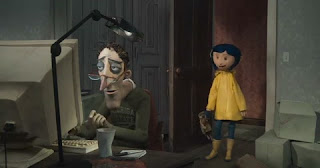