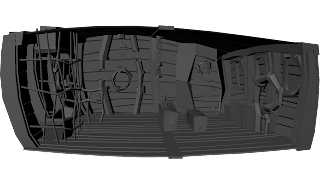 The objects in the cabin scene have been placed to give them a more natural position in the scene. I have added a pod to hold the divers helmet with grips to suggest a full suit should be there. The anchor now has some drop holes with a protective cave. I have added a handrail to the door. The pipes have had sections remove to bring make more of a link with the windows, as feedback suggested they looked accidentally filled. 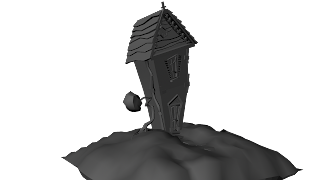 The cottage i had originally produced was ugly, lacked character and didn't aid the narrative or imply anything in particular. I had tried to accomodate the cottage i was seeking but was unable to get a good ration between roof and house that was consistant with the work. The one piece of good reference i found would not work with the tree i have designed. So i tried the opposite. I was thinking back to Madam Souzas house in Triplets Belleville Rendevous, and the personality of the house after the citys expansion (via railway lines) had bent it. The crooked body, aided with features that you could find on haunted house designs, though not overly so, help bring out the eerie nature that this could be something sinister but without over bearing. 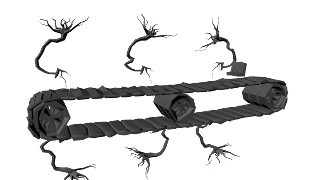 Finally the road is complete full rigged as is the chair. The only exception is the seatbelt that needs amending which will only take place once the character is modelled and rigged.